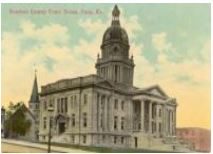 Paris as a birthplace would seem to mean France. However, the United States has more than 20 places named Paris, the largest one is the county seat of Lamar Co., Texas.

Handwritten records across various repositories could easily confuse Paris, Tx with Paris, Tn. One small letter differentiates them and it’s the last one which is often blurred in the cursive handwriting of old. In Ohio alone, there are five towns or townships named Paris, and several in Wisconsin. Paris is also a place name in Kentucky, Indiana, Illinois, Arkansas, Idaho, Iowa, Maine, Michigan, Mississippi, Missouri, Virginia, Oregon, Pennsylvania, New York and New Hampshire.

Geographers and genealogists rely on specificity. The wrong person or the wrong place makes a big difference. With so many geographic options for Paris, it is not hard to imagine there are 45 thousand men alive named John Smith.

Disambiguation works for genealogists, it keeps us from melding people with the same name.

In one county within five miles of one another, two women named Kathy Lynn Smith were born six months apart, one had a brother named John (yes I was researching John Smith) and a brother named George. The other woman had four siblings including Donald and Debbie. I wanted to identify their parents so as to be able to distinguish each of them. After identifying the two different women (possibly three if you count an outlier in an adjacent county), I researched their potential parents, siblings, spouses, children, nieces, and nephews. Thank goodness one had a nephew named Omar! At times, I think all Smith researchers should be commended for even beginning their ancestor hunts. The final breakthrough relied upon one line in a newspaper with an address tied to a specific set of deeds about property owned by one couple, the parents in question.

Wikipedia is a good place to start for geographic information, but the unattributed information compares to Ancestry’s linked genealogies. Good clues but more research is needed.

Previous PostNaturalization Papers Solve the Question, Sam...
Next PostSomeone Already Wrote a Book about This Grave...