Someone Already Wrote a Book about This Graves Family 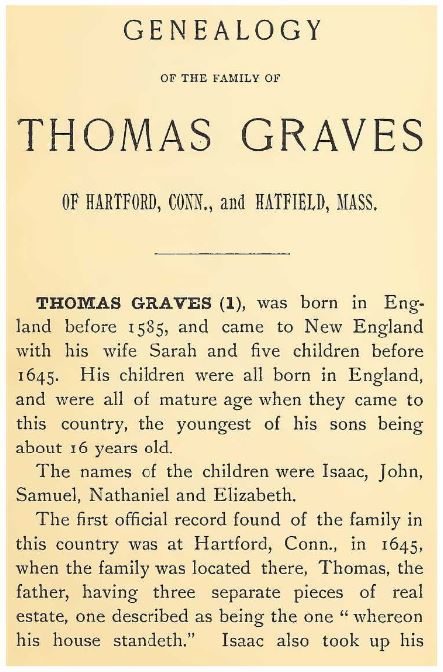 The Graves Family of Arvada, Colorado

John Card Graves wrote and published a set of books about the Graves family, Genealogy of the Graves Family in America, Three Volumes, Buffalo N.Y.: Baker, Jones & Co., 1896. He collected information about multiple branches of the Graves family by letter from family members across the country. His research took place prior to the establishment of most states’ vital record departments, so many of the specific dates are not available elsewhere. To put this monumental accomplishment in perspective, more than one hundred years ago he wrote and published three volumes filled with facts, without computers, from handwritten letters.

One of those branches was Oliver Graves, seventh generation from the original immigrant Thomas Graves.

Oliver, the third son and eighth child of Calvin Graves and Fanny (Robinson) Graves from Brookfield, Orange Co., Vermont, married twice, had two sets of children, moved to upstate New York, moved to DeWitt Co., Illinois, was involved in the California Gold Rush, lived in Bloomington, McLean Co., Illinois, was involved in the Colorado Gold Rush, and finally settled in Arvada, Jefferson Co., Colorado back when it was still known as the Kansas Territory. Basically he went from coast to coast, back to the Midwest, and on to the Rockies.

Brookfield, Williamstown, and Barre Townships are contiguous, though in two different counties in Vermont.

They were enumerated in Barre, Washington Co., Vermont in 1840 along with two boys under ten. Brookfield, Williamstown and Barre, Vermont are contiguous, about 15 miles apart, just south of Montpelier.

In 1850 Oliver Graves a miner, lived in El Dorado, California, with Palmer Story his father-in-law, a miner and Wm. Story, while Lucy was back in McLean Co., Illinois with three children; George, William and John P.

Emily F. Graves enumerated with her maternal grandparents in 1850

John and William, two children of his first marriage, died before the 1850 census. John, listed in the Graves book as John Palmer Graves, was born 7 February 1839, died 21 December 1847. It seems unlikely his name was John Palmer Graves. Palmer Story is the name of Oliver’s second father-in-law. It is more likely the first son named John who died young may have been named John Adams Graves as that was the child’s maternal grandfather. This first son named John may have died in Vermont with his maternal grandparents, or in Illinois with his father; so far no grave site has been located. Oliver named another son named John, John Palmer Graves, a son of Lucy Palmer (Story) Graves and a grandson of Palmer Story. This son was also listed in the Graves book as John Palmer Graves. While it was not uncommon for one child to be named after a deceased elder sibling, the middle name Palmer for the first son seems wrong. There are no indications of a Palmer connection in the early Adams or Graves lines. William Henry Harrison Graves, the third child was born 17 October 1840 and died soon after possibly in Barre, where they lived in the 1840 census or Malone, Franklin Co., New York where they lived in 1844. Oliver and his second wife Lucy lived in South Clear Creek, Arapahoe Co., Kansas Territory in 1860, along with Emily his daughter from his first marriage, and four children from his second marriage, one of whom is listed as Geo. L age 13 born in Illinois.

George Linus Graves was born 15 January 1838 and died 14 June 1886. He was likely born in Vermont, though one source states New York. He was probably enumerated with his parents in 1840, one of the two boys under ten in Barre, Washington Co., Vermont. In 1850 he lived with his stepmother Lucy in McLean Co., Illinois and two younger half brothers, while his father was off mining in California. His younger sister Emily lived with their maternal grandparents back in Vermont. In 1860 George was listed with his father in Illinois, with the name George, but with his brother’s age. Either he was not with the family, or the enumerator wrote George’s name, and skipped William and added William’s age, and then went on to list the rest of the family. He has not been located yet in the 1870 census, though there is an L. S. Graves age 32 a bookkeeper in Virginia City, Nevada. He was a single man, a miner in 1880 in Ruby City, Gunnison Co., Colorado where he lived with his younger half-brother, John Palmer Graves. In 1885 George L. Graves a miner, lived in District 2, Delta Co., Colorado with Chas. Cutter. There is no indication in the Graves book that George was buried in Brookfield or anywhere in Vermont, just that his death was in 1886. It is likely he was buried in Colorado, however he does not have a gravestone in the Arvada Cemetery with his father. He may be in an unmarked grave in a cemetery in Delta.

There are errors and omissions in both volumes by John Card Graves about this family. The information published in 1896, was obtained between Lucy’s 1895 death which is included and Oliver’s death in 1896 which is not included. It is likely the source may have been Oliver or one of his children. One error is the middle name of the first son, John Graves born in 1838. Another is the marriage date of Edward Oliver Graves listed as 1879, but shown in the McLean Co., Illinois Marriage records to be 20 January 1880. Emily (Adams) Graves burial site in New York is an omission. As each and every statement is verified or contradicted by other evidence, this family record will become more and more accurate.