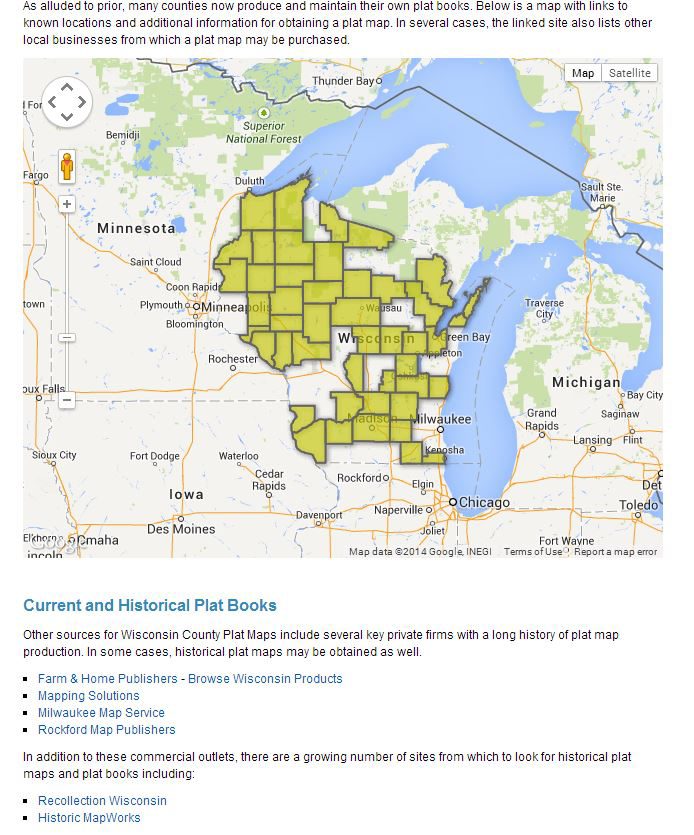 Land Ownership Maps are like photographs, a snapshot of a specific time and place. Sometimes land ownership maps can solve genealogical questions and others times they pose the questions themselves. The county courthouse should have the most up-to-date maps available anywhere. They need to for tax reasons. Historical maps were printed from the courthouse maps or from title company maps and have specific years attached to their printings.

A Picture is Worth a Thousand Words

Wisconsin has developed a system, most of it online, for identifying parcels and examing plat books.

While not every section of every township of every county in Wisconsin is available, the depth and breadth of the maps is astounding.

Add to this map the next piece to the East, Map 55

Two big genealogical map clues are evident. The first clue is visual, long bowling alley shaped parcels generally indicate (but not always) that a farm was partitioned equally for heirs.

The second clue is that three parcels are exactly 8.533 acres, M. Breitenstein, H. Breitenstein and Maggie Fischer.  The Annie Meirer parcel is 17.066 acres, twice the size of one of the three smallest. The Michael Breitenstein parcel is 34.132 acres or the equivalent of four of the smallest parcels. It looks like nine heirs with some consolidation already occuring by 1913. In fact Michael Henry Breitenstein Sr. inherited 1/9 of the family farm, 8.533 acres when his mother Maggie (Gerber) Breitenstein died in 1883. By 1913 he had purchased half of the remaining parcels, probably from four of his brothers, Jacob Jr., William P., George and Daniel. His youngest sister Annie (Breitenstein) Meier probably ended up with her sister, Carrie (Breitenstein) Bodeman’s plot.

Look for this type of land ownership map in library collections in unversities, historical societies and city library systems. Those may be the most apt to have been digitized and indexed. Some cities or counties have several different years, look in the 1870s, 1880s, early 1900s, and 1910s. The 1890s were not as prolific, perhaps because of the 1893 economic crash. Search for land ownership maps, property ownership maps, county atlases and plat books. For instance the Kansas Historical Society web page lists by county, the maps available for the state.

Beside being pretty, colorful and great illustrations, these maps may contain important genealogical search clues. Don’t overlook them.

Previous PostThank the Photographers
Next PostResearch the Source