Start With What You Know 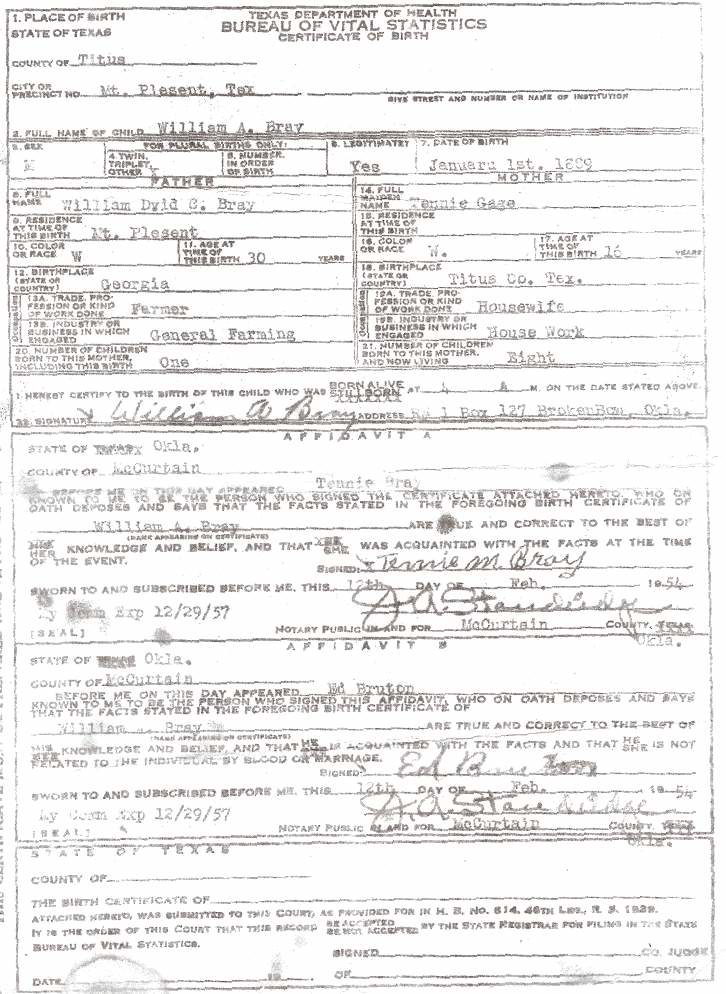 Start with what you know. Genealogy research is like any other, research from known to unknown proving each link along the way. Interview living members of the family with specific questions and for a free flow of memories. Don’t suggest specific dates or places, let the memories work.

The question is the parentage of Tennie A. (Gage) Bray. Ruby Lee Bray, one of many granddaughters of Tennie Bray, a daughter of William Alexander Bray and his first wife Mary (Virgin) Bray, was born 17 April 1912 in Arkansas, most likely in Sevier Co. Ruby married (1) Velton Lonzer Chapman. They had children, including some born in Bowie Co., Texas in the early 1930s. William A. Bray, Ruby’s father and Tennie’s son, filed a delayed birth certificate on 12 February 1954 which his mother Tennie Bray signed. Her maiden name was listed as Gage. The timing for the issuance of this delayed birth certificate suggests he needed a birth certificate to apply for social security benefits.

First find each pertinent families in every possible census. The census is the skeleton on which hangs other facts, events and connections. Without it, there is just a pile of data.

Velton Chapman does not show up in the 1930 index available from Ancestry. When there is a person missing in the census index on one of the Internet sites, Ancestry, HeritageQuest or FamilySearch, it is possible to find someone by going back a decade or forward a decade on the same site OR switch sites and search again in the original decade. In this case neither Heritage Quest nor FamilySearch had a 1930 index. Velton Chapman is enumerated with his parents in 1920 in Titus Co., Texas.

Reviewing this 1930 federal population census of Bowie Co., Texas shows Ruby was 17 at the time of the census, born in Oklahoma with parents listed as born in the United States. The 1920 Oklahoma census lists Ruby Bray in Sulphur, McCurtain Co., Oklahoma with her parents William A. Bray and Mary.

William A. Bray and Mary are clearly Ruby’s parents in 1920 census. In the 1930 census William lived with his second wife Ester, in McCurtain Co., Oklahoma.

William Alexander Bray, a married man with a wife and five children. was born 1 January 1889 in Mt. Pleasant, Titus Co., Texas and registered for the draft in Gillham Sevier Co., Arkansas.

In this census, Tennie C. Bray was born in Texas as were both her parents.

In the 1910 census Penny C. Bray was listed as born in Texas; both her parents were born in Tennessee.

In the 1900 census both Tennie and her mother were born in Texas, while her farther was born in Tennessee. In summary, Tennie was listed as born in Texas in four of four of these census enumerations. Her father was born in Tennessee in three and Texas in one. Her mother was born in Texas in three and Tennessee in one. Tennie’s husband was enumerated as Bill, W.A., William C., and William A. The 1920 census clearly shows William C., however when you compare that C to others on the page, my hunch is that it was an A, the rounded part of the penstroke and it didn’t hit the paper for the back part of the penstroke or it faded. As much as I believe that by examining other capital As and Cs on the page, I transcribed it as William C. since that is what it looks like. Don’t change your mind or adjust your view about what the page says, just because you know what the enumerator should have written.

To be continued in What to Do While Waiting for the Mail to Arrive.