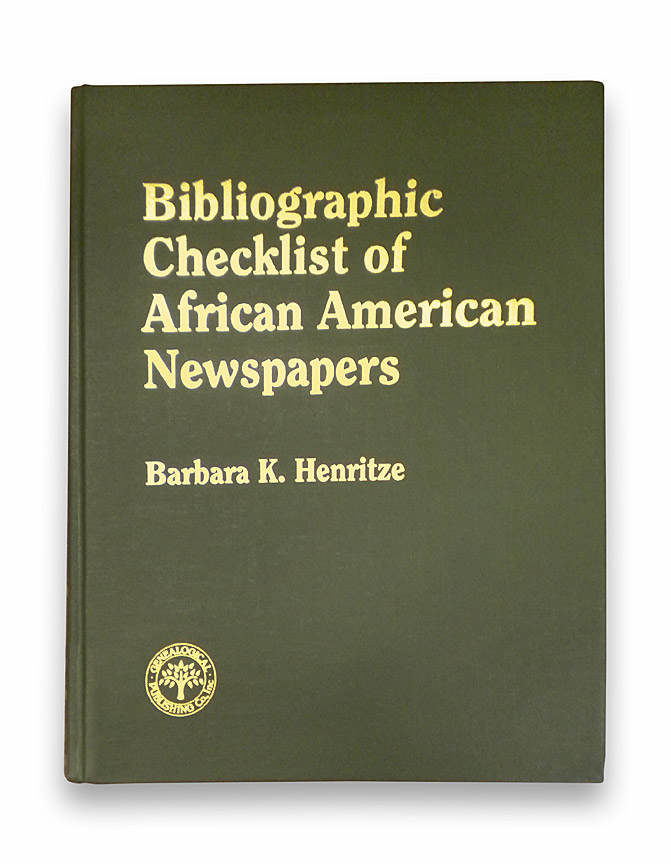 While in the library for heat and power a couple weeks ago during a snow storm, I checked various databases and search engines for my surname, Henritze. I know pretty much who and what should be found. Henritze, Esenwein and Eisenbise are surnames that help me gauge a search engine’s power and depth. To my great surprise, one of the things I found was my book, Bibliographic Checklist of African American Newspapers, online on ProQuest and GoogleBooks. This book is still under copyright and I hold the electronic rights, so it should not have been online. At first, I was angry, a myriad of intellectual property rights issues ran through my head. When power was restored, I would have to waste time; check it out, find the problem and solve it. Later that week when we were back home with power, I took it as a compliment, someone thought it would be a good thing to have online. I still had to solve it, but I wasn’t angry anymore….

Out of Control Genealogical Projects

Twenty years ago, a friend and research buddy, Sandra Craighead helped me out prior to a move. As a thank you, I planned to write an article for the local black genealogical journal since she was the editor. I read an article in the Wall Street Journal about black newspapers that piqued my interest and surprised me as I previously had not thought much about the genealogical advantages of searching in specialized newspapers. So I researched the black newspapers in Cleveland and planned the article. Then it grew to include newspapers in Cuyahoga Co., then the Western Reserve, then Ohio and finally the whole country. Like any genealogical project, it grew completely out of control and sideways, some magazine titles snuck in and I couldn’t bear to delete them. The list contained more than 2500 newspapers and I didn’t know what to do with them. It was way too big for even a series of articles. I asked Frank Carroll of the Library of Congress if I could compare my list to his. He said my list was already the longest list he knew in the country. I called Sandy to let her know she was never getting an article and if I had any sense I would stop altogether. If, I could figure out a path to make the list thorough instead of just huge, it could be a book. Naturally she encouraged me and was one of my strongest cheerleaders. I went through all the Rowell’s and Ayer’s Newspaper Directories I could get my hands on and added titles. I combed through article after article looking for clues. By 1993 I had more than 5000 newspapers. I had to fish or cut bait. The Genealogical Publishing Co. sent me a contract and that should have been that.

Stopping a genealogical project is fifty times harder than starting one. I always had the feeling, I could have found more. I stopped collecting titles and went to work on the Introduction. It’s embarrassing how long that took. The book, Bibliographic Checklist of African American Newspapers, was published in 1995, a critical success,  not a best seller. It was reprinted in 2008 in paperback by the Genealogical Publishing Co. There are about 50 copies left and a couple hardbacks I have at home still in shrink wrap.

Newspapers are contemporaneous sources for what you need to know. Every once in while there is an historical column and you get a glimmer of how things were 50 years before the date of the paper. Newspapers are available on Inter Library Loan (ILL) from your local library. You have to read them, but the information contained can not always be found on the Internet. There are newspapers listed in the archives of Google News, but I haven’t checked them against the titles in the book to see how many are historically black newspapers. Sometimes newspapers are the only source for specific dates and events. Newspapers position your ancestor in a time and place in a way no other source can. Even if your ancestor is not specifically mentioned, reading about the style of funerals or weddings can give you a window into the social mores at the time.

Before Internet searching changed the research world, newspapers were used all the time, now they are used differently because it is a six step process instead of  a Google search. We have become so delightfully spoiled with instant access.

After contacting ProQuest and Genealogical Publishing, the electronic publishing problem will be corrected soon. It was an oversight. However for a couple more days, it will probably still be up. Check it out or better yet buy a copy. After all the printed copies are sold, it might be a good thing to have it online.

An aside on research buddies – Internet search capabilities have made researching at home so incredibly fruitful, it’s hard to believe the comaraderie established by accident in libraries. I met Sandy over the Tennessee census index books in the microfilm room at the Western Reserve Historical Society Library in University Circle. After a while we just knew each other. She was an intrepid researcher. I envied her the trips she took to the southern states’ archives. My research included microfilmed original records, many reels purchased from the Tennessee State Library and Archives. Here’s a reference book for Sandy, The History Atlas of Africa by Samuel Kasule published by Simon & Schuster Macmillan Inc. in 1998. Check it out at ABE Books or your local used bookstore and look at the internal migration patterns of various tribes.