The Breitenstein Book is Done 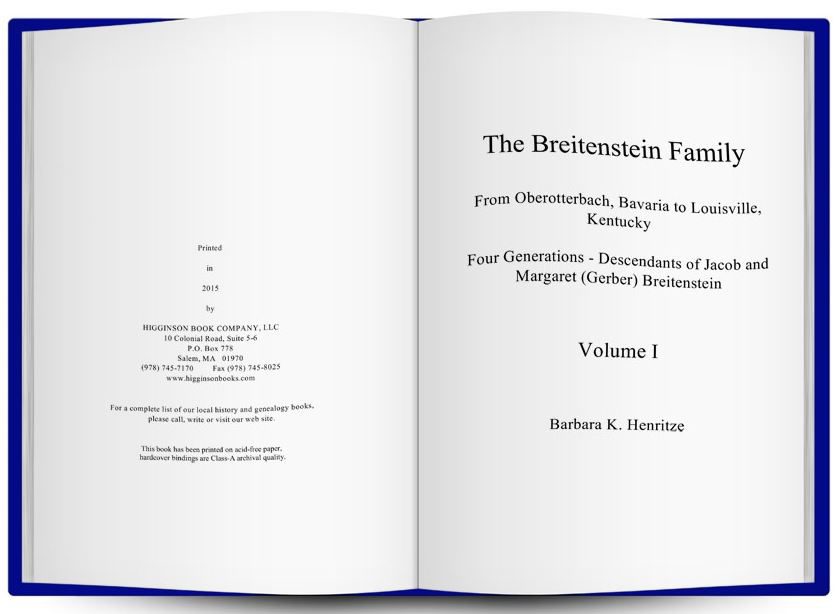 The Breitenstein Family: From Oberotterbach, Bavaria to Louisville, Kentucky

The book’s not quite 300 pages, including an every person index, footnotes, bibliography, chart, table, photographs of Jacob and Maggie, passport application, and a lot of decdendants, 13 in the second generation, 63 in the third generation, 119 in the fourth generation and a list of 222 in the fifth. I think that generation is complete, but not if Henry Thomas Bodeman and Elaine J. (Kegler) Bodeman of Lake and Cook Co., Illinois had children. I also don’t know the maiden name of Robert Joseph Bodeman’s first wife, Betty J. But, and this is a huge but, if I wait until I have every single fact nailed down, I will never publish this book, soooooo…., It’s off!!! (I may have liked it more as a work-in-progress! Then I could keep tinkering with it.)

This is a mockup of the book. I should have it in hand in a couple weeks. What a labor of love. While I tried to include whether or not a specific descendant went to U.K. (see the blue binding) or U.of L., I didn’t know for everyone, and amazingly some people didn’t choose either of those and went to different schools altogether!

For the next volume, I want to include all the photographs I can locate of the grandchildren of Jacob and Maggie.

William Phillip Breitenstein had six children and of those, Bertha Elise (Breitenstein) Parsons, Robert Edward Breitenstein, Margarite Rosamond (Breitenstein) Saylor Buehler all had grandchildren who might have early photographs.

Next, somewhere in the houses of descendants of Maggie Breitenstein and Peter Fischer’s ten children; Margaret Caroline (Fischer) Richardson, Peter Jacob Fischer, William Phillip Fischer, Charles Peter Fischer, Elisabeth Barbara (Fischer) Jenkins, Henry Louis Fischer, Arthur Michael Fischer, Florence Anna (Fischer) Diemer, Lillian Rose (FIscher) Klotter, and Ruth Emma Fischer, there must be pictures. OK, not Ruth Emma, she didn’t marry, she didn’t have children, but the rest of them all lived in and around Okolona or Louisville and I know there are photographs out there.

The nine sons of Michael Henry Breitenstein all took photographs and I am lucky enough to have some of them, but there are bound to more out there of Edward Lawrence, Michael Henry Jr., Theodore Peter, John Louis, Lawrence Jacob, Herman Joseph Sr., Carl Ernest Sr., Emil Raymond Sr., and Julius Clarence Breitenstein.

Pictures of George Breitenstein and his family might be harder to find, since he had no grandchildren. The same as Annie (Breitenstein) Meier, but of Daniel Breitenstein’s nine daughters, two did have children, Gladys Lloyd (Breitenstein) Bush and Shirley Minrath (Breitenstein) Jennings. Their children must have some photos of all nine girls.

Previous PostSouth Carolina County Marriage Records
Next PostReading in the Middle of the Day!