The Science Fair is Coming 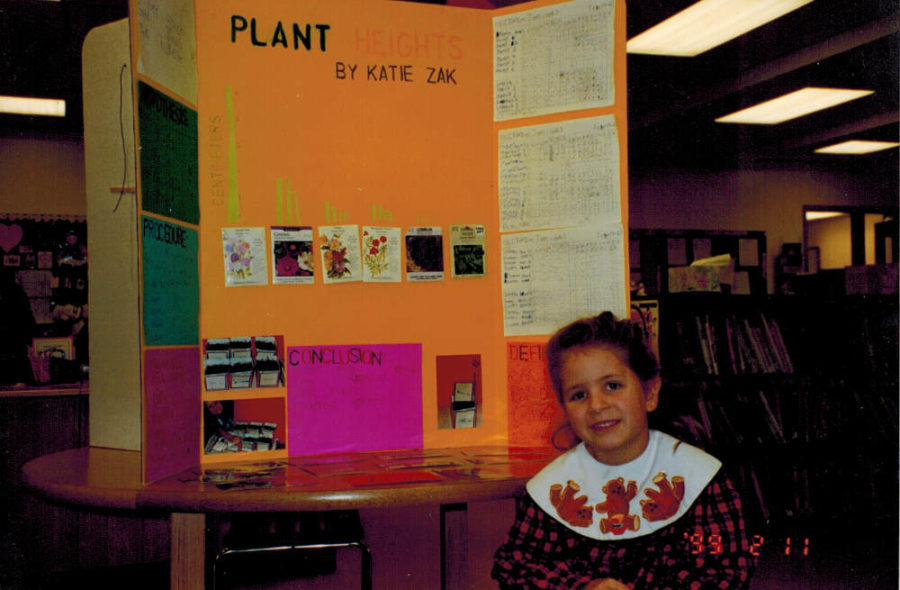 One December week, my kindergarten daughter’s Friday Folder included an eleven page two sided single spaced instruction handout for the upcoming school wide science fair. I recycled it. While she could read, my feeling was five year olds and science fairs were ridiculous, so I pitched it, didn’t even read the fine print. The week before Christmas break, she came ome discussing what she was going to do for her science fair project. My internal voice was screaming, are you kidding me; my external voice was asking, what are you intered in learning about; my mom radar was wondering if the recycling was gone or do I have to get another copy of the treatise on what’s allowed at science fairs; my spousal voice was debating if I could get him to be the point man on this project. One thing was for certian, I had done no science fair projects as a child, neither had my husband and neither of us was interested enough to do one now. We had seen the projects done by other parents and laughed knowing we wouldn’t be those parents because we didn’t have that scientific equipment at home, accessible at work, or even know without looking it up, what that particular piece of equipment measured.

Are You One of Those Parents?

One thing we knew, she would be doing this project with minimal help from us, just like every future project, but how to make that happen when, she couldn’t even read all the words on the eleven page handout much less understand them. I could understand all the prohibitions, some of which involved words I would have to look up before I knew for certain what wasn’t allowed. We would be the suppliers of materials, spelling questions and equipment.

My daughter has always been very observant, so that would have to be the focus of this event, since she was five. We talked about the growing plants to music project which may or may not be an urban legand, better growth to classical music than rock or was it Mozart compared to the Beatles or hard rock. Who knew, if it hadn’t been done recently, would comparing Brittany Spears to Madonna be derivative? Over dinner we discussed the scientific community and speculated on the value of repeating someone else’s work. When did it cease to validate another hypothesis and just become repetition?

After lots of discussion, she chose a plant race. She would plant different seeds and see which one grew the fastest, the tallest or the longest. I don’t remember whether we used seeds we already had, or if she got me to buy new seed packets. She choose four or five different seeds and then she had to guess – hypothesize a winner.

My contribution was economic, I bought the material, seeds, dirt, project board, paper, and developed the photographs. I also supplied a ruler marked off in centimeters and offered the metric system as the scientific measurement system. I showed her how to draw an observation chart with 32 lines. Take a piece of paper and draw a line across the half way point, keep doing that five times to get halves, quarters, eighths, sixteenths and finally thirty-seconds, for a chart with enough lines for a month’s worth of observations. She didn’t like that plan and drew her own with three pages of paper and a ruler. We discussed the hypothesis, procedure, definitions, material list, observations and conclusion. I suggested she copy those words from the 11 page treatise on projects. The rest of the project was written in that creative, sound-it-out-spelling that was the cornerstone of writing in her school’s kindergarten class.

Phil set up a light and she put the seeds on a tray on a table next to the laundry room. She treated them equally, the same amount of light and water. Let the race begin. At the end, photographs were taken of the winners since live plants were not allowed at the fair. I don’t remember which plant grew the most, I do remember some seeds did not germinate for weeks. She learned the word germinate. Finally some seeds grew and then came the measuring.

She had a wonderful time and wanted to do another one. Her next project in first grade, she decided to examine snowflakes to see if it was true or false that no two were alike. It did not snow for 35 days in a row. Huge life lessons in that one. She never did another project dependant on weather.

She loved it. She and another child were the kindergarden winners, went to the display their projects at the mall and got T shirts. I’m pretty sure she entered every year in grade school, some more successful than others. Every year children with one or two scientists for parents submitted amazing projects with computer rendered drawings, graphs, charts, photos, calculations and what not. Other children just gave up and let their parents do the whole thing. I give the judges a lot of credit for discernment along those lines.

As you go the science fairs in your child’s life, reward those children who did it themselves with your attention. Ask them about their projects, compliment them on their ideas, boards, handwriting, color choices, whatever catches your eye. You can not change the parents who do their children’s projects, but you can give real and positive attention to the children who did their own. Your job as a parent is to teach your child how to plan a project, how to use the scientific method to test the answers, how to complete a project, and how to explain a project. Try not to worry about the projects done by parents. Maybe they always wanted to be in a science fair!